The following is taken from the dOCUEMNTA (13) website, which is full of interesting articles and ideas surrounding dOCUEMNTA (13)  which is held in Kassel, Germany and considered one of the most important art and culture events today. The website is well worth a visit. AL 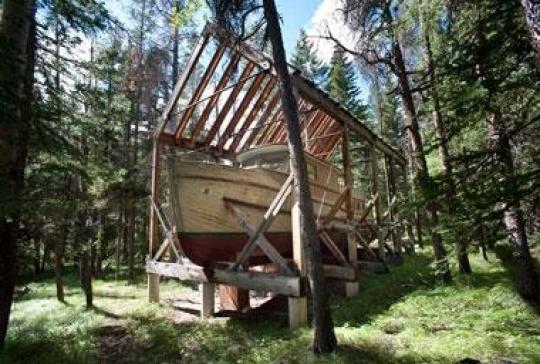 the retreat: a position of dOCUMENTA (13)

Through the act (v.) and space (n.) of retreat, participants will raise questions about the character of our society and the modes of artistic and cultural investigation being introduced today to create new modes of becoming and belonging.

To enter or enact a retreat (re-trahere = with-draw) is to draw together, in refuge, seclusion, separation, and sharing—not in order to abandon active life with others, but to consider ourselves, with others. The choice to retreat, to move to a space away yet in the world, can open up the possibility of redressing forms of disparity and can disturb relations of power, even if the act itself may seem a reduction of means or a lack of means altogether. By choosing to retreat, one may be seeking an opportunity to withdraw from the bombardment of information with which we are blessed and cursed today. To retreat might constitute a rejection of the deadened political status quo in order to nurture more radical possibilities of human communality. One may step away from mainstream society and human interaction by following a religious or spiritual vocation to retreat, entering a concentrated space of silence and meditation to re-centre living and dying. Devising alternative economies based on gifting, barter, and exchange rather than on money is also an example of a retreat from the dominant socio-economic paradigm. All these modes of retreat point to opportunities for the strengthening and revitalization of body and spirit in order to return to that dangerous mess of social life and everyday consciousness that is caught up in the speed of contemporaneity. Retreat is not abandonment of social challenges, political antinomies, or cultural dead ends, but a temporary condition whose intent is to generate permanent change.

The question of why the practice of retreat is important, of why it is different from forms of self-alienation, and of why (what might seem like) passivity could be a positive form of agency, remains open. However, the notion and the act of retreat, withdrawal or exodus could be a necessary ground for politics and the politics of aesthetics today, since the productive process of cooperative constitution at the core of the social also owes its potential and validity to the act of spontaneous refusal. Politics and art are projects of infinite creative production triggered by a force that always starts from choice—choosing to do or not to do—and propelled forward by local affections and joyful passions. In retreat, consciousness produces itself by stating the full presence of the present-being without witness and without stage, sensing a homo- or homeo- (‘similar’ or ‘common’ or ‘shared’ in Greek, belonging to humus or the ‘earth’, rather than to homo-, ‘human’, as in Latin) enriched by the love of a collective intelligence yet to be regained.

In The Pleasure of the Text, Roland Barthes states, “there is only one way left to escape the alienation of present day society: to retreat ahead of it.” The Retreat of dOCUMENTA (13) and Banff Research in Culture will generate new ways of retreating ahead of the limits, aporias, problems, and crises of a century caught between imaginative and conceptual fertility and sterility—not to effect some questionable escape, but to allow for the generation of new spaces of openness, freedom, and possibility.