Tonight Helen joins us in Toowoomba for her opening CONSIDER HER WAYS by the Twilight Girls, an ongoing collaborative project between Sydney based artists Helen Hyatt-Johnston and Jane Polkinghorne. Yesterday Ali and I were lucky enough to view an ‘almost edited’ 25 minute film which is a further extension of this nearly 15 year collaboration and worth staying tuned for.

Below is a link to an essay written by Jacqueline Miller on the poster project by The Twilight Girls and the premise behind this ongoing work.

The ‘revolutionary power of women’s laughter’ became something of a cliché in much irony-clogged feminist work of the 1980s. While often smart and sparkling with caustic wit, such work rarely raised a belly laugh, provoking not so much laughter as rueful, knowing smiles. This is precisely the Twilight Girls’ distinction — a generous and raucous humour that overflows gallery etiquette. This is not private joke territory; the bad taste has a broad appeal, and it is infectious.

The Twilight Girls’ first major collaboration in 1997 featured six larger-than-life movie posters lining one wall of the gallery portraying the artists in various notorious film roles, with deliberately bad feminised/queered titles: From her to eternity, Saturday night beaver, One million years BB (before bras). The fantasy-realising world of cinema was also invoked in a series of putative lobby cards, where such queer icons as Elizabeth Taylor playing Maggie the Cat were lovingly mimicked. With the now relatively simple technique of digital graphics, the artists were able to envision their fantasies for public display, staging them within the space of the promotional film poster, that essence of the film that is distilled into a single shot and becomes emblematic of the film as commodity (and is also a lot quicker and cheaper to produce!).

Polkinghorne and Hyatt-Johnston openly acknowledge their debt to popular culture for their innermost personal identities and desires; film and commodity culture have permeated their core beings, and yet they are still able to mess that culture around, to tease and frustrate it with incredulity and insouciance, their playful evasion of any one category of sexuality being exemplary of their strategy. They cavort in the space of possibility that self-lampooning humour allows. The Neanderthal sexual politics of Saturday Night Fever are queered, as are the macho heroics of the Western genre (The Good, the Bad, the Chubby), while the sexploitative B-grade sci-fi of the 1950s is lovingly mined for its feminist subtext (Attack of the Big Top Beauty). 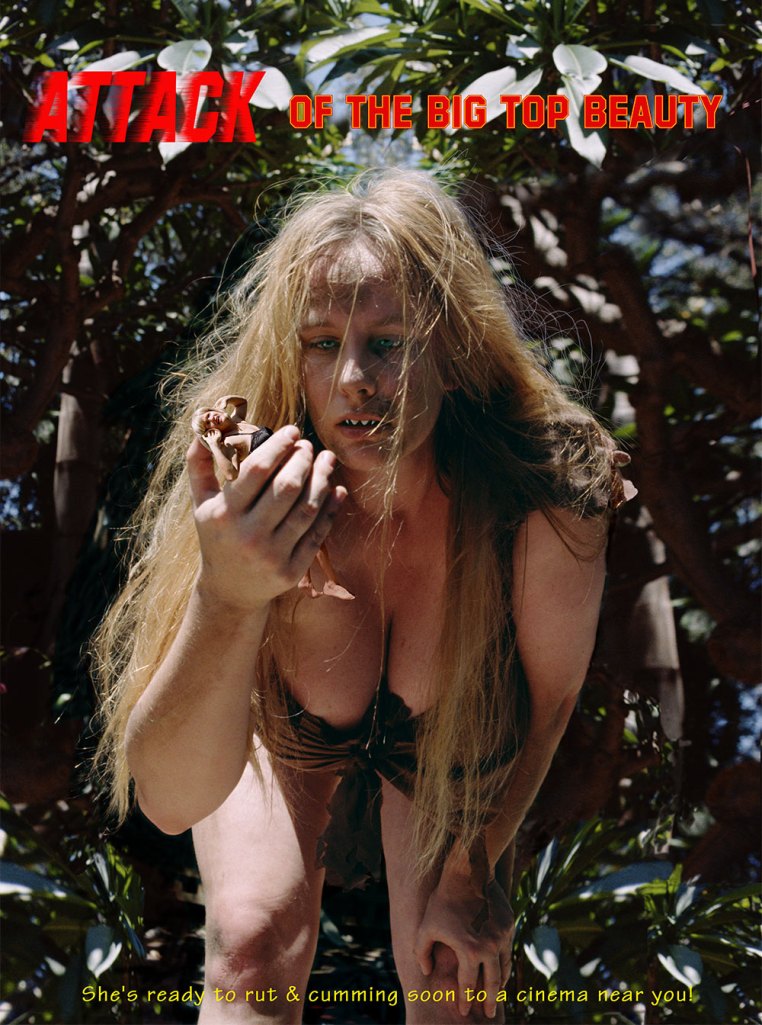 On the opposite wall, that quintessential 70s gadget, a record selector crammed with vinyl, offered a plethora of further opportunities to dress and crack up. In arguably the best resolved component of the exhibition, a series of faux album sleeves read like a roll-call of skewed genres, from opera (Big girls sing fat songs), to girl groups (The Tampettes), to world music (We are third world: proceeds from this album will go to feeding all the people in the world who weigh less than 65 kg)and more. The format allows for plenty of word-play, the artists relishing in the smutty song-title (‘How deep is your throat?’) as much as in spoofing the authority of critical album notes.

In a later work, part of Hollywood Hills made while the artists were in Los Angeles, a huge pair of breasts filled the gallery like a mammoth film set, not unlike the massive vengeful mammary that hunts down Woody Allen in Everything You Ever Wanted to Know About Sex but were Afraid to Ask (1972). They are like the built façade of femininity. Not pert but susceptible to the force of gravity, these pendulous organs are rendered in a size relative to the place they occupy in the popular image of femininity. Like Magritte’s manifesting of the unconscious in Le Viol (1934) (where the face of a woman is conflated with her breasts and sexual organs), this installation foregrounds the disproportionate part breasts play in female identity. These are the breasts not of your dreams but of your nightmares, of the Monstrous Feminine, of the implant gone berserk, of the desirable turned grotesque. As such, they might be dangerous…although the Twilight Girls always lace their danger with humour. This strategy does not take the edge off the point—the pervasiveness of the reductive practices of sexual stereotyping and objectification—but rather complicates it. For these girls enjoy that fetishising, partake of it, flaunt their large sets, build whole exhibitions around them and turn them into art. Polkinghorne and Hyatt-Johnston objectify their own bodies, fetishise their own breasts, buy shares in the commodification of their own body parts, not only to underline their complicity in that very process but also as a means of enjoyment. And they succeed in this where many other feminist artists have failed because through their humour and carefully selected mix of glamour and anti-aesthetics they resist trading on their own potential to titillate, keeping a loose hold on their own representation without ever becoming heavy or high-handed. And at the same time as they invite us to laugh and enjoy with them, so do they betray nothing of the irony of much art derived from popular culture. Instead, what is palpable is a certain pathos in the predicament of being reduced to the size of your body parts, an earnest concern for the plight that they and many women experience every day of their lives.

The Twilight Girls are conscious that their broad humour and constant gags serve to undermine their own efforts to become art/pop/film stars, for their public is never sure as to whether the artists take their own work seriously, or indeed whether they believe that things like art, film and celebrity are worth being serious about. And in a sense that is one of the driving forces of their practice, that relentless play between humour and serious intent, that desire to invoke in the viewer that curious moral space between carefree lampooning and critique. While the Twilight Girls openly embrace bad taste and politically incorrect B-grade (and below) representations of femininity, so they call attention to ‘high-culture’ hypocrisy, where lip service may be paid to feminine and queer empowerment but where the space for self-actualisation may be even more limited. Similarly, their flagrant self-commodification pulls into focus the absurdity of attempting to compete with or live up to the promises of popular culture, but also allows them the freedom to use those tools as means of self-expression. As the artists themselves put it, ‘Hollywood Hills continues our overblown corpse of a practice where the most overt and obvious signs of capitalism inflicted on flesh are wrought gigantic in an attempt to exhaust/explode/implode our own bodies into the world’.

Helen Hyatt-Johnston and Jane Polkinghorne have collaborated on a latter-day feminist project where the theory is but a distant subtext to the sheer pleasure of the process — a giggling late night game of one upmanship to hit upon the corniest pun, the silliest costume, the most outrageous scenario in which to cavort and vaunt of themselves. Popular culture feminine and heterosexual stereotypes are both lampooned and adulated, their glamour aspired to but at the same time mired in tack. This is a game without parameters, egged on by sleepless delerium and the untrammelled nature of adolescent fantasies of fame and stardom.

But the process meets maternal superego when it comes to execution. For the finished product here is nothing like the abject, formless detritus of some recent art vying to ‘represent’ femininity as excess. Rather, the work is formal and meticulous, without a hair out of place, the lipstick smudges quite deliberate; these girls have mastered their technology. The artists have faithfully reproduced the aesthetics of cinematic and popular music genres using studio shots and digital manipulation. Excess is instead evident in the hysterical number and diversity of mise-en-scenes the artists have chosen to act out, eclectic verging on arbitrary choices that suggest a potentially endless project. And excess is also, perhaps more intriguingly, evoked by the very process of collaboration, whereby the viewer is kept guessing as to where one artist ends and the other begins.

Hyatt-Johnston and Polkinghorne’s work is a hilarious celebration of the endless potential to personalise Hollywood fantasy so as to enjoy the vicarious glamour and tack without foreclosing either individual expression or the subversion of mainstream codes. The artists confuse genres and disciplines, feminist aspirations and sacred cows, in a mad comic brew that speaks more of the pleasure of play and friendship than of the construction of sexed identities. And this is the point, to evade the strictures of accepted feminist strategies by putting inclusive play back on the map.