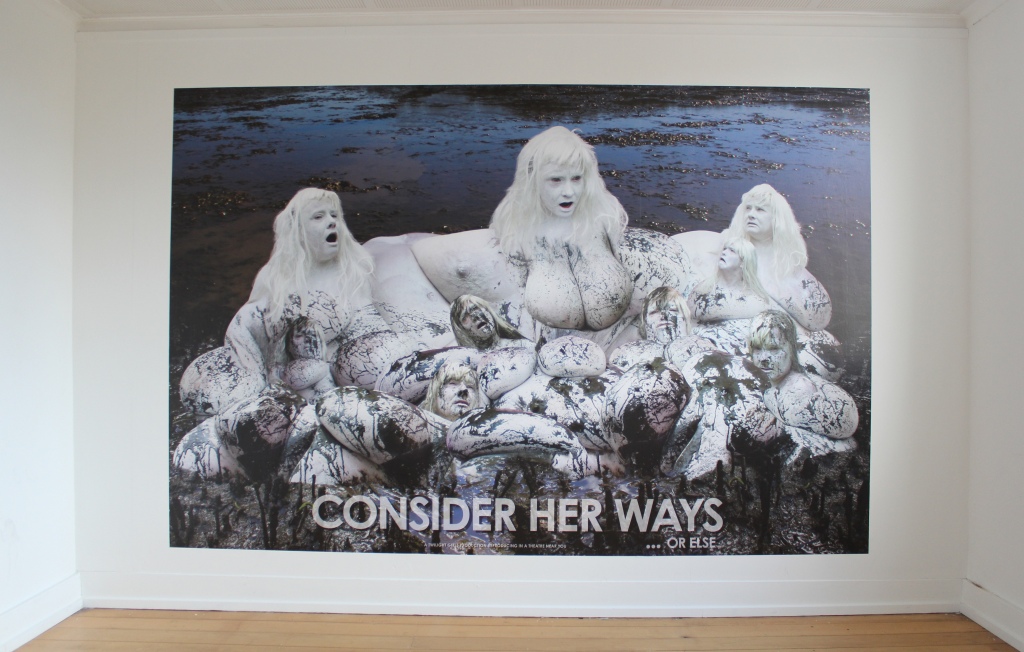 Last night RAYGUN had the pressure of presenting The Twilight Girls, collaborative duo Helen Hyatt-Johnston and Jane Polkinghorne. The  was a great opening. Helen was a smash, and  spoke brilliantly about the work! Below are the images from the opening and  The Twilight Girls contribution to their catalogue. If you missed the opening please do pop up and see the work x

The Twilight Girls are the collaborative duo Helen Hyatt-Johnston and Jane Polkinghorne. Since 1990 they have used B-grade representations of the body and sexuality embracing the politically incorrect as a means of undermining notions of celebrity, beauty, taste and aesthetics. Stereotypes in cinema, literature and popular culture are adored and lampooned as genres are deliberately confused. A relentless play between humour and serious intent operates as an intermingling of high cultural hypocrisy and their love of trash and shlock. They use a variety of mediums ranging from film, photography, sculpture and installation.

1 . What ideas are you examining through your exhibition at Raygun?

The title of the work comes from Consider Her Ways, a 1956 novella by the English writer, John Wyndham, where human intervention has resulted in the elimination of the male species. In Consider Her Ways a hysterical landscape has been created by using negative and grotesque representations of the ultimate monstrous female family and examines the unsettling possibilities of a world where reproduction, living and being are realised without men. A billboard sized movie poster of an erupting absorbatron-like landscape birthing clone-like daughters is the result. It references representations of women in science fiction and horror as parody but also for the cultural powers the monstrous feminine appears to hold and haunt in science fiction, fantasy and mythology. In this work the artists, rather than referencing female breasts as symbols of idealised motherhood or sexual titillation, have them perverted and proliferating overwhelmingly, and in opposition to nurture, here the breasts are repulsive and horrifying rather than sexual.

2. What are the ideas that surround your art practice?

We are interested in B-grade representations (in this case more Z-grade) of the body as well as perverting porn, sexuality and in embracing politically incorrect means of undermining notions of celebrity, beauty, taste and aesthetics. Our love of film and books for instance gives us an endless source and resource of inspiration in regard to stereotypes in cinema, literature and popular culture, which we reenact and restage with our own interpretation that has us pushing each other more often than not in grotesque way. For instance all of the shots of us were taken sitting in real mudflats with uninvited baby eels, shrimp and crabs crawling over our bodies. Although the work relies on intensive post-production it is also firmly located in the real. Rather than using digital manipulation to aesthetise and polish the image, instead we use it to push the work further into repulsion and filth.

3 . What are your decisions based on when choosing medium or material to realize a project?

The choice of medium really depends on the idea driving the work. For example in a recent work 50 Ways to Kill Renny Kodgers (2014), which was a collaboration with Mark Shorter, it was agreed to make a film so that his character could die in multiple schlocky ways honouring cinematic kills and also so that he could sing his way to doom. Smotherlode (2013) on the other hand took the form of giant movie poster advertisement that promised a film to come.

In Consider Her Ways (2014) we were exploring the idea of family and what makes a family by taking it to the extreme and mixing mythology and science. There are twisted references to the story of Lilith as the first female, parthenogenesis, daughter cells and asexual reproduction. How did it all start? Who came first and ideas of evolution and what if scenarios? For instance Valerie Solanos in SCUM Manifesto would have it that the Y chromosome is a deformed X chromosome! We made a deliberate mess of benign representations of female fecundity in Consider Her Ways with an ugly, brutal, yet ridiculous and humorous brandishing of the powers of the breast and female reproductive capabilities. Thus continuing The Twilight Girls’ exploration into the potentialities of horror in feminine representation. In this case it challenged the idea of family. The work is obviously not real, so extreme realities or possibilities can be imagined. There are of course many kinds of families.

What if humans had families that were more like termites or bees, or formed more amorphous connections, never separating from each other?

What about the family of monsters in the film Alien? Is that any less a family? Is the mother not doing her best to look after her children?

As a result Consider Her Ways ended up being realised in the form of a billboard-sized movie poster reinforcing the spectacular and over-blown nature of The Twilight Girls oeuvre.

4. What are your influences and other interests?

That would take a long time to list as there are so many writers, film directors, films, artists, events, people… but it would have to include Doris Wishman, Ed Wood, John Waters, Divine, Russ Meyer, Tura Satana to name a few But as artists we also make our own individual work and that is rather different from what The Twilights Girls do but that is another story.