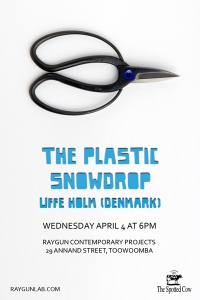 Uffe arrives in Australia today with his show at RAYGUN next Wednesday. Ali and I will work with him on his install for the next couple of days so it should be fun. Ali has been racing around town buying topary trees for the night…..

As a practicing artist what are the issues\concerns you have been consistently addressing within your artwork?

As a living being I am consistently addressing a vast number of issues. There is no real dividing line between me as a person and me as a practicing artist. Which makes me an unprofessional artist, or a professional person. And that has mainly been my focus during my practice/life; how we perceive ourselves as human beings and how we try to push these limits.

Do you classify your art as being one thing more than the other e.g. photography, film, painting, sculpture, music or installation and do you see an expansion into other mediums in the future?

When you think about making new work do you always consider applying a degree of historical content or do the works weigh more heavily towards a more personal investigation?

I don’t consider it, it just happens. Everything within sight is of interest, and history is as relevant as the intensity of colour, a geometric abstraction, the newest scientific research or political manifestations. All these things, and more so, are but colours on our canvas, so to speak. I don’t differ between personal investigation and historical content, but I hesitate every time I use my own history as a reference, because there is a fine line between what is true to many people and what is true to me. Some artists understand to walk that fine line, but I guess that’s because their personal history is somewhat synced with what we consider to be the history of the world. Again, I try not to be too deliberate, because then art becomes calculation and that’s manipulation or marketing to me.

When you look back through this body of work do you see any answers unfolding within this investigation?

I have to take this last question very literally. I guess you can see art making as playing with paper fortune tellers. You remember those origami toys, where you fold a piece of paper to a petal, put numbers on the flaps and move them with your fingers until the asker/player is manipulated to choose the flap you want them to choose, under which lies the message that you wrote when you constructed the paper fortune teller. You can only make eight different messages, but as long as your audience changes, you can keep it going for quite some time.  I just like looking at all the answers at once. When you have eight truths displayed at the same time, they sort of level each other out, and become the truth about the mechanism, which is in turn perhaps more like a long poem. I like to see my body of work like that. I hope this answers your question?